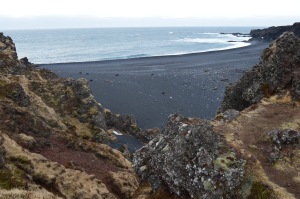 The beach at Dritvik in western Iceland is remarkable not only for its beauty but for the way it pays tribute to those lost at sea.

In a gale on March 13, 1948, a British trawler from Grimsby got into trouble on the rocky coast.

It was smashed to pieces as rescuers fought to save the lives of those on board. Almost 70 years later iron pieces of the boat remain scattered across the beach’s black volcanic sand.

Could there be any more effective way to illustrate the terrible risks which are taken by those “in peril on the sea” to earn a living and to bring us food? 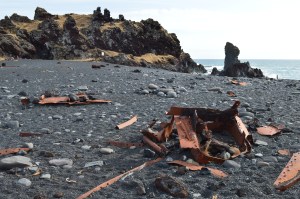 Iceland is a fishing nation and crews from around the Snaefells peninsula rushed to help the British fishermen that night.

Boats came out from Arnarstapi, Hellnar and Hellissandur, but conditions were difficult, with bad weather and heavy seas. Iceland’s harsh winter had not yet given way to its spring.

The rescuers could see members of the crew of Epine GY7 on its forecastle and in the wheelhouse, and some had strapped themselves to the rigging. 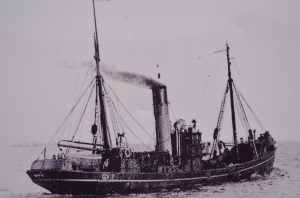 But the tide was coming in against the jagged rocks formed centuries ago when the volcano Snaefells erupted, and huge waves were breaking over the ship.

Remarkably, one of those waves dashed a man off the fishing boat and washed him ashore – exhausted, shocked but alive.

The local crews had to bide their time for the tide to change. When it did they shot a line to the Epine and an Englishman managed to secure it to the trawler’s mast.

By now only four of the crew remained alive. Each was pulled to safety on a rescue seat.

Of the Epine’s 19 crew, only five lived. Fourteen British fishermen, who had survived the world war which had so recently ended, would not return home from the icy waters of the North Atlantic. 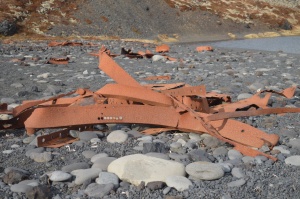 Today, the volcano Snaefells – made famous in Jules Verne’s Journey to the Centre of the Earth – looks down as tourists walk among the pieces of wreck to where the black sand falls away to the water’s edge.

Holidaymakers admire the beauty of the coastline and the very rocks upon which the Epine foundered.

But the red ironwork, broken and scattered by the tide and the wind, ensures it is impossible not to spare a thought – even among such beauty – for those whose lives ended on that dark night in March 1948. 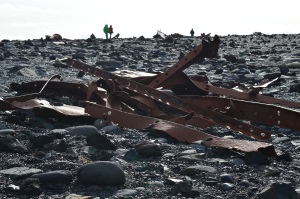 4 thoughts on “A WRECK ON THE ICELANDIC COAST”