Shadow Warriors of World War II: The Daring Woman of the OSS and SOE by Gordon Thomas and Greg Lewis 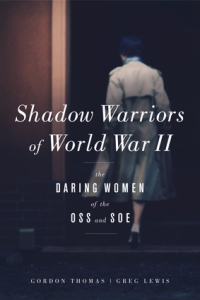 This is an invaluable historical account, shedding light on the heroism and bravery of the women spies who helped usher the Allied forces toward a victory.

Move over, James Bond—these real life stories of secret agents belong to the ladies. Shadow Warriors of World War II, from Gordon Thomas and Greg Lewis, is a thrilling, revelatory history of the women who contributed to the war efforts behind enemy lines as spies on behalf of Britain and America.

William Donovan, inspired by the burgeoning espionage efforts of the United Kingdom, persuaded President Roosevelt to initiate an agency on American soil, dedicated to gathering information and fighting the Nazis covertly. That organization would eventually feed into the CIA—but first, it would employ women for its actions, and to ends that defied expectations.

The stories here are ripe for film adaptation, but first require honor, as America and Britain’s first women spies are shown to have been both invaluable and at risk. Many ended up in concentration camps or at the receiving end of Nazi bullets.

Their ranks included Nancy Wake—brazen, fiery, and skilled with weapons, she was the sort to dodge bullets and retrieve packages from vehicles before they exploded. Betty Pack used her considerable appeal to extract information from men during liaisons, and Virginia Hall posed as a journalist and became one of the agents the Nazis most resented. She escaped, on one leg, over the Pyrenees. These women jumped from planes, blew their covers to help others, and accepted the dangers they faced without blinking.

Thomas and Lewis unfold their stories carefully, preserving their efforts—their successes, their near escapes, and occasionally their betrayals—with detail, resulting in a history that is both thorough and exciting. Distressing conclusions are given their space, and fallen spies are honored, with their extraordinary efforts always taking center stage. While better known personalities also make appearances—even Ian Fleming is here—they are dwarfed by these “shadow warriors” and their daring exploits.

This is an invaluable historical account, shedding light on the heroism and bravery of the women spies who helped usher the Allied forces toward a victory.

One for a quiet afternoon. Commando Attack. A Spaghetti war film from 1970, which is sometimes called Churchill’s Leopards.

Crazy plot but fun and entertaining in its way. Certainly better than most of the films in its genre made in Italy at that time.

I always find Hollywood and British propaganda films from the WW2 years fascinating.

Film-makers were particularly keen to tell heroic stories about life in Nazi-Occupied countries, showing how people resisted: the courage of the oppressed over the foolishness and barbarity of the oppressor.

Here is one I had not seen until recently: Paris After Dark, from 1943.