As we approach the 70th anniversary of D-Day, here’s a little feature on a place of great focus to veterans on June 6.

Every year a special service of remembrance is held at Bayeux War Cemetery. It is a very moving event.

These photographs were taken two years ago, on June 6, 2012.

The event was attended by many veterans and their families. 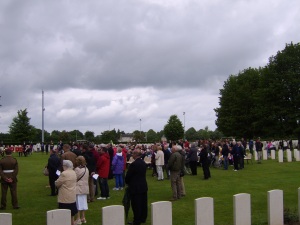 The cemetery contains 4,144 Commonwealth burials of the Second World War, 338 of them unidentified. There are also over 500 war graves of other nationalities, the majority German.

A selection of photographs taken during a recent visit to Pozieres British Cemetery.

Pozieres is a village about six kilometres north-east of Albert, and the cemetery is a south-west of the village on the north side of the main road (D929) from Albert to Pozieres.

According to the Commonwealth War Graves Commission website, the village of Pozieres was attacked on July 23, 1916 by the 1st Australian and 48th (South Midland) Divisions, and was taken on the following day.

It was lost on March 24-25, 1918, during the great German advance, and recaptured by the 17th Division on the following 24 August.

There are 2,760 Commonwealth servicemen buried or commemorated in this cemetery -1,382 of the burials are unidentified but there are special memorials to 23 casualties known or believed to be buried among them. There is also one German soldier buried here.

“An excellent well written story. Could not put it down. Love World War Two books and this was the best I’ve read for a long while.”

A selection of photographs of the war memorial in the French town of Bailleul, near the Belgian border.

The memorial commemorates the fallen from the town of World War One and World War Two.

It is in a backstreet near the town hall.

It appears to be the remains of a ruined church. 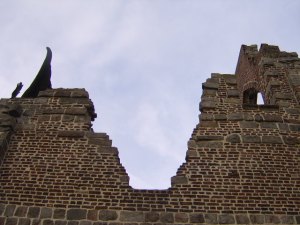 These photographs were taken in early April 2014.

A brief story of two Royal Welch Fusiliers who were wounded at battles for woods on the Somme.

Their graves are located in the cemetery at Abbeville, which was some way from the front.

I took these photos some years ago and now the wonderful Anne Pedley, of the Royal Welch Fusiliers Museum in Caernarfon, has helped me piece together parts of the stories of Ceredig Ellis and Edward Roberts.

Second Lieutenant Ellis, whose parents were from Aberystwyth, was married to Mildred and lived 61 Oxton Road, Wallasey, Cheshire.

He was educated at Bangor University where he was a member of the OTC.

He was commissioned on February 1, 1915. He was transferred to 15th RWF (the London Welsh) and joined the battalion in France.

He saw action with D Company and was wounded at Mametz Wood on July 11, 1916.

He was to die of these wounds, most likely at Abbeville where there was a large military hospital.

As the inscription on the grave indicates Mildred had recently given birth to their first child.

The second fusilier, CSM Roberts, enlisted with 10th RWF and embarked to France on September 27, 1915.

He received the Military Medal for bravery while in trenches in the Kemmel area, where the Fusiliers defended themselves against a German gas and an infantry attack.

He also fought at High Wood and it was during fighting there that he was first reported missing and then wounded.

He died of his wounds at Abbeville ten days later.

“This book starts with an intrigue and in the present time but quickly moves back to WWII and a different perspective, that of the Channel Islands, the only part of the UK to be occupied by the Nazis during WWII.

“It quickly pulled me in and was full of pathos, well told and a story that flowed well with some twists and turns that took me off track but I pulled myself back quickly.

“It was a story I didn’t want to end and I enjoyed the book and would like a sequel!”

It’s a fascinating portrait of the SOE officer who looked after agents heading into the field.

Noor (she later used the name Nora) was born in 1914 in Moscow to an Indian father and an American mother. The family moved to Paris, where she was educated. She later worked writing childrens’ stories.

Noor escaped to England after the fall of France and in November 1940 she joined the WAAF (Women’s Auxiliary Air Force). In late 1942, she was recruited to join SOE as a radio operator.

In June 1943 she was flown to France to become the radio operator for the ‘Prosper’ resistance network in Paris, with the codename ‘Madeleine’. Many members of the network were arrested shortly afterwards but she chose to remain in France and spent the summer moving from place to place, trying to send messages back to London while avoiding capture.

In October, Noor was betrayed by a Frenchwoman and arrested by the Gestapo.

In November 1943, she was sent to Pforzheim prison in Germany where she was kept in chains and in solitary confinement. Despite repeated torture, she refused to reveal any information. In September 1944, Noor and three other female SOE agents were transferred to Dachau concentration camp where on 13 September they were shot. Noor was 30. 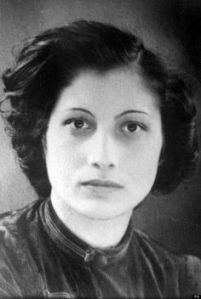 For her courage, Noor Khan was posthumously awarded the George Cross in 1949.

One more for bridge lovers. Some photographs taken on a return from a research trip to the Normandy beaches a couple of years ago.

The sun was shining as we approached the Pont du Normandie, the 2,143-metre long cable-stayed road bridge which crosses the river Seine between Honfleur and Le Havre.

Construction of the bridge, which was designed by Michel Virlogeux, began in 1988 and lasted 7 years. The bridge opened on January 20, 1995.

There is an 856-metre span between the two piers. At the time of the construction this was the longest span of its kind in the world.

Continuing east you then immediately cross another remarkable bridge. 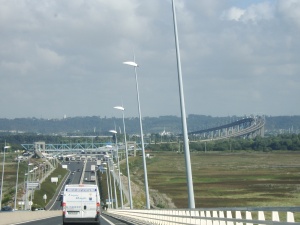 It is a lovely stretch of the journey back from Normandy to the Pas-de-Calais area.

FAREWELL LEICESTER SQUARE is now only 77p on KINDLE. 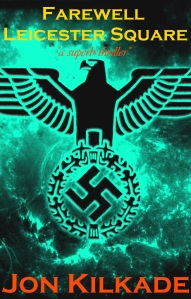 2005. Terrorists target London in an attack which makes headlines around the world.
Elsewhere, a fishing boat makes a remarkable find: a World War II bomber, hundreds of miles from where records show it disappeared.
The two events combine when journalist Jon Kilkade takes a blood-curdling phone-call.
It describes a suicide mission to destroy London. Not in 2005, but during the chaotic final months of the Nazi Third Reich.
The action in this fast-paced novel switches from occupied Jersey to the lives of SOE and Resistance fighters in Belgium.
At its heart is a deadly circle of Nazi fanatics intent on creating a final blitz which would see the people of London wiped from the face of the earth.
A riveting thriller in the tradition of Jack Higgins and Alistair MacLean.

“A great tale of WW2 daring, intrigue and heroism told in a gripping way.”

“Captivating from beginning to end. A thoroughly enjoyable read.”

“The story keeps the reader wanting to find out what will happen next.“

“Superb. I loved this novel for so many reasons – believable characters, excellent research and an exciting plotline. I was caught in the storytellers trap from beginning to end.”

“A good enjoyable read. Kept me captivated from start to finish.”

“Excellent thriller. It’s well researched – lots of stuff about SOE and the resistance.”

“An almost excellent read. If you enjoyed the TV series “Secret Army” and “Kessler” then this book has the same feel about it.”